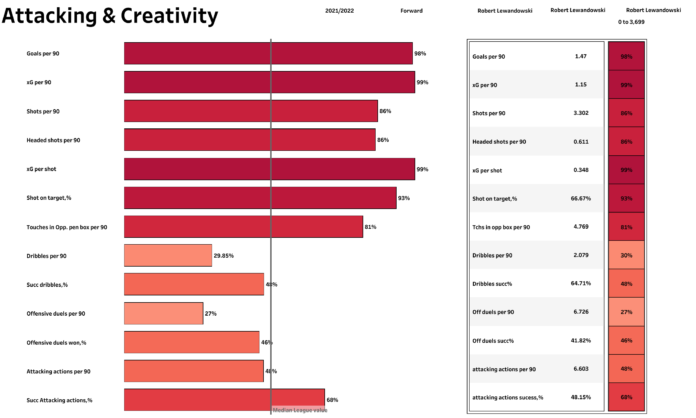 Robert Lewandowski is regarded as one of the best strikers in modern football. He is currently playing for German club Bayern Munich and will be out of contract in 2023. The Polish international has been leading their line since 2014 and has won seven league titles, along with a UEFA Champions League winner’s medal. However, some of the reports suggest that the forward could be on the move away from Germany. One of the teams that are looking to improve their attack and add more experience to their starting 11 is FC Barcelona. Barcelona is ready to offer a contract to the forward and some performance improvements in the recent past could lure the forward to a possible move to the Spanish club. Lewandowski has been a consistent goalscorer for his club and country, and here are some of his stats from the UEFA Champions League 2021/22 campaign. 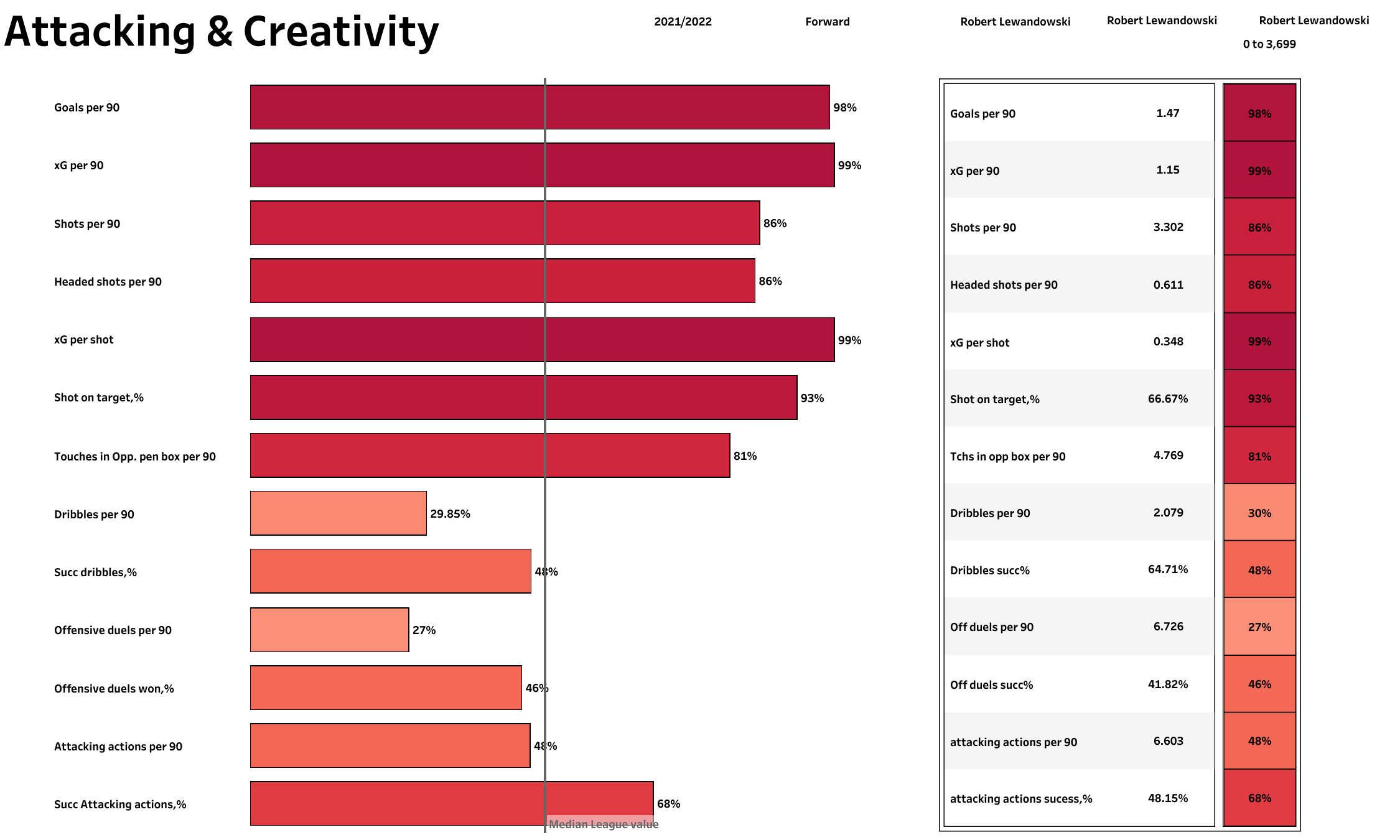 When looking at the above chart, the general rule is that the longer the bar, the better the performance — you can see the league average in the middle, and the % is the percentile rank the player is in. The above viz is in comparison to the other strikers in the UEFA Champions League this season. Lewandowski has featured in all eight games played by Bayern Munich and has scored 12 goals. He is the highest goalscorer in the league and averages 1.47 goals per 90 minutes. It can be noted that the player attempts more than three shots per 90 minutes and has a high shot accuracy of 66.67%. He is involved in a few attacking actions and is clinical in front of the goal. 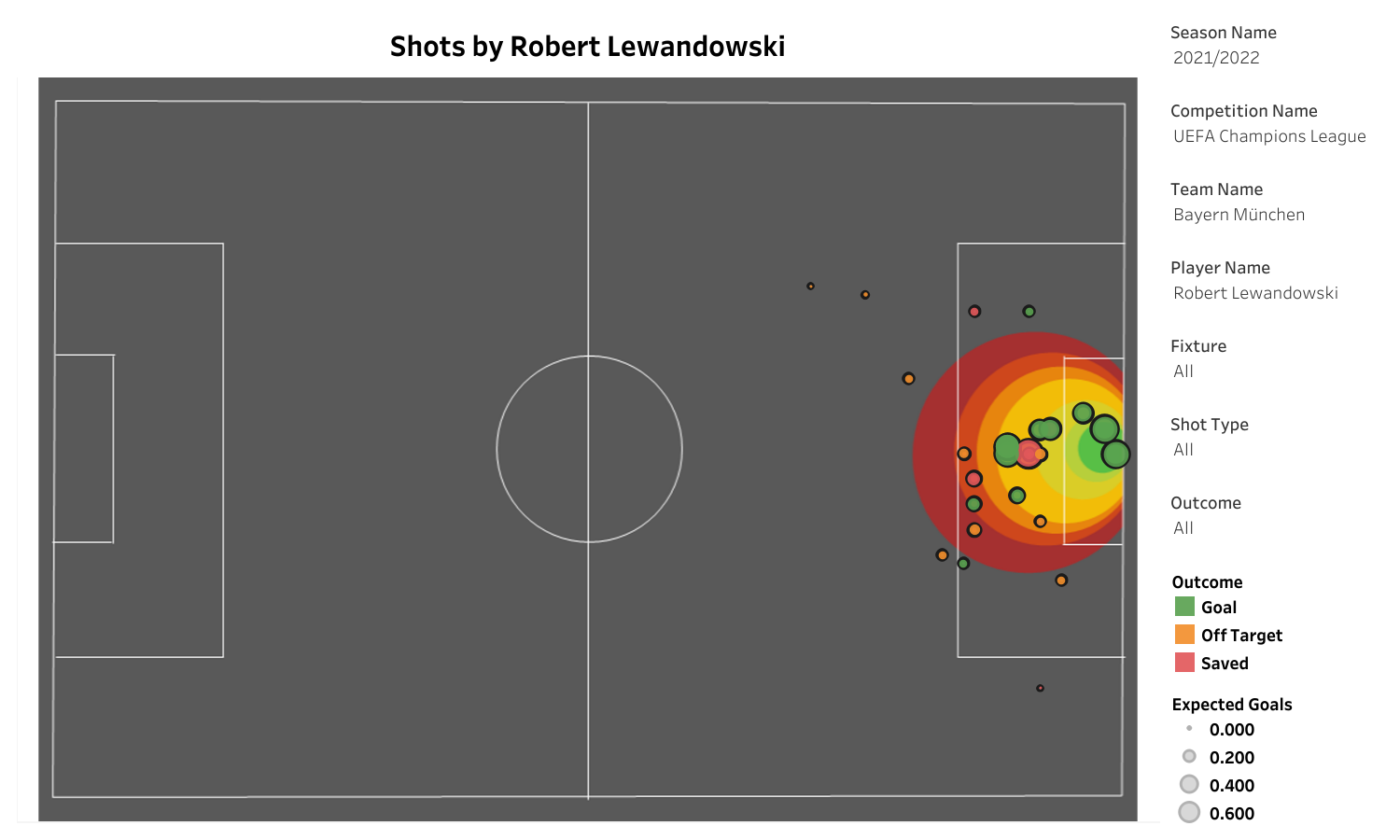 Robert Lewandowski attempted 27 shots to score the 12 goals. The forward managed to hit the target on 18 occasions and has a high shot accuracy rate. Of these 27 shots, 23 were attempted from inside the opposition’s penalty box. The 33-year-old has scored all the goals from inside the box, and three were from the penalty spot. He has a very high xG rate of 9.40. The forward is also strong in the air and has won a few aerial duels inside the opposition box. This has also resulted in a goal on a couple of occasions.

The forward has also set up three goals for his team with an xGA of 1.66. He has attempted 157 passes this season, and these include nine crosses, one smart pass, and a through pass. Other than this, he has taken 39 touches inside the opposition’s penalty box.

The Polish superstar has scored 31 goals in 27 league appearances in the Bundesliga. He has been a consistent performer for Bayern Munich and still can score more than 20 goals. The forward could be a valuable addition to Barcelona and lead the line next season.

Advanced Stats and the Beautiful Game: Does Football Lag Behind Other...

Transfer talk: Barcelona are in talks to sign Arsenal centre-back