Barcelona hosted Borussia Dortmund at the Camp Nou in a clash that ended up securing the Catalans’ advancement to the knockout stages of the Champions League. And for the most part, Ernesto Valverde’s tactics seemed to have worked against Lucien Favre’s as the Blaugrana were dominant for the majority of the game.

This tactical analysis will discuss and do an analysis of both teams and try and unravel the story behind Barcelona’s 3-1 victory over Borussia Dortmund.

There were a couple of changes in Barcelona’s setup. Valverde opted for his traditional 4-3-3 formation but with the absence of Gerard Piqué, Nélson Semedo and Jordi Alba, Samuel Umtiti partnered Clement Lenglet at the centre-back position, while Junior Firpo and Sergi Roberto manned the left and the right-back spot respectively.

Further up the pitch, Ivan Rakitić replaced Arthur Melo and Ousmane Dembélé came in for Antoine Griezmann but was soon subbed off due to another injury. 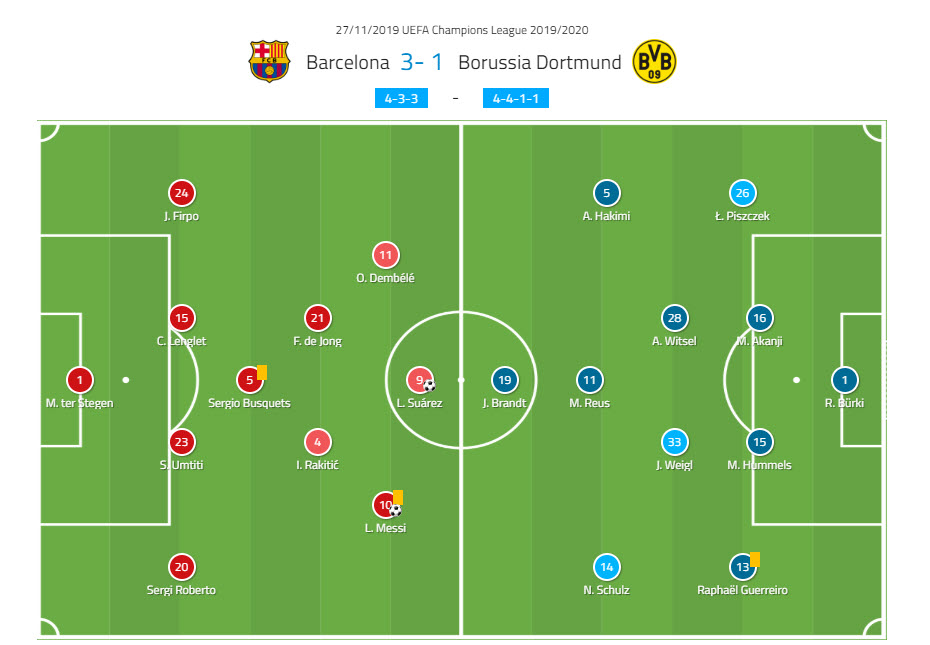 Favre deployed his troops in a 4-4-1-1 setup but also made a couple of changes to the personnel themselves. Bürki was still manning the sticks along with their standard full-backs. Weigl was moved back into midfield, however, and Mats Hummels was therefore partnered with Akanji at the centre of defence.

With Jadon Sancho on the bench and Paco Alcácer out injured, there were some changes up front. Schulz and Hakimi were the wide players and Reus played just behind Julian Brandt in the forward line.

The first half was very much what ended up deciding this clash as a whole. Barcelona were ruthless, quick and aggressive for the majority of the opening half an hour while their counterparts, Borussia Dortmund, sat back and didn’t really do much at all.

Favre decided to deploy his team in a 4-4-2 mid defensive block when out of possession and the intention was not to contest the ball but rather to wait for Barcelona to come to them and block their passing channels towards the middle third.

If you love tactical analysis, then you’ll love the digital magazines from totalfootballanalysis.com – a guaranteed 100+ pages of pure tactical analysis covering topics from the Premier League, Serie A, La Liga, Bundesliga and many, many more. Buy your copy of the November issue for just ₤4.99 here

Messi and Lautaro would be a dream fit

Can Anyone Stop Them? Barça B sustain their unbeaten run at...

Under the microscope: Can Gavi become a future leader at Barcelona...