Barcelona travelled to Ipurua last Saturday and managed to snatch away all three points after beating Eibar 3-0. Even though the Basque hosts fought bravely, the Catalans were clinical and made use of the hosts’ disorganised pressing tactics and the abundance of space they were given when entering the final third.

This tactical analysis will use analysis do dissect both teams’ tactics and determine just how Barcelona managed to beat Eibar so convincingly.

The home team were deployed in a fairly standard 4-4-2 system that they’ve used for the majority of the ongoing season. There were a couple of changes to their setup from the last game they played in La Liga.

Jose Angel Cote started at the left-back position while Orellana and Diop were joined by Álvarez and León in the middle of the pitch. Up front, Sergi Enrich and Charles led the way.

On the other side of the pitch, Barcelona were deployed in their usual 4-3-3 formation but saw some changes in the lineup. Jordi Alba and Samuel Umtiti both made their big returns after injury and Sergi Roberto returned to his right-back position.

The rest of the squad didn’t see any changes as the Sergio Busquets, Frenkie de Jong and Arthur Melo midfield was followed by Griezmann/ Suárez/ Messi forward trio. 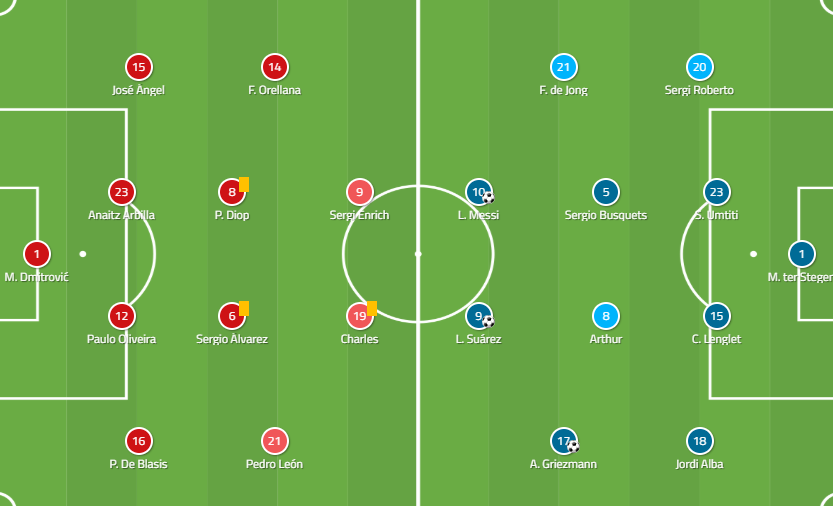 If you love tactical analysis, then you’ll love the digital magazines from totalfootballanalysis.com – a guaranteed 100+ pages of pure tactical analysis covering topics from the Premier League, Serie A, La Liga, Bundesliga and many, many more. Buy your copy of the October issue for just ₤4.99 here

Will Barcelona be able to administer the final blow to Manchester...

Dembele and Rakitic must justify their refusal to leave Barcelona

Xavi Simons and the demons of modern football