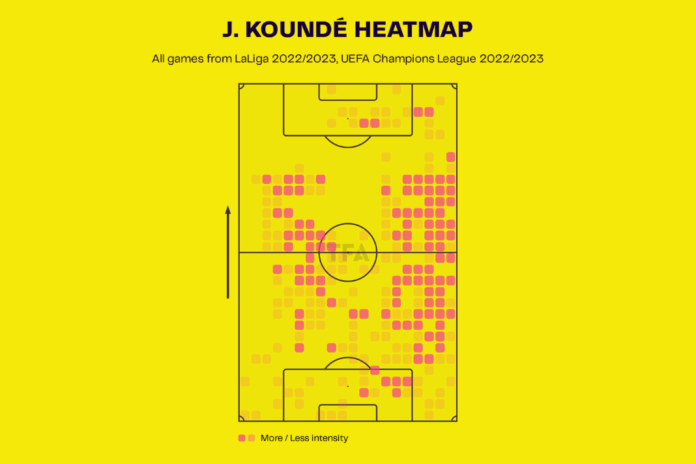 Barcelona had to battle other European clubs for the signing of French defender Jules Kounde from Sevilla. Barcelona were keen on signing the defender from a fellow LaLiga club and signed him at the end of last month. Jules Kounde was one of the top defenders in the LaLiga last season. Xavi needed to strengthen his backline, and Jules Kounde has been a great addition to it. The player has started in every league match since his arrival and is likely to remain a part of the backline throughout the season. Xavi has been impressed with his versatility and this has been a great positive for him. We now look at some of the stats of the player to learn more about how Kounde has performed this season. 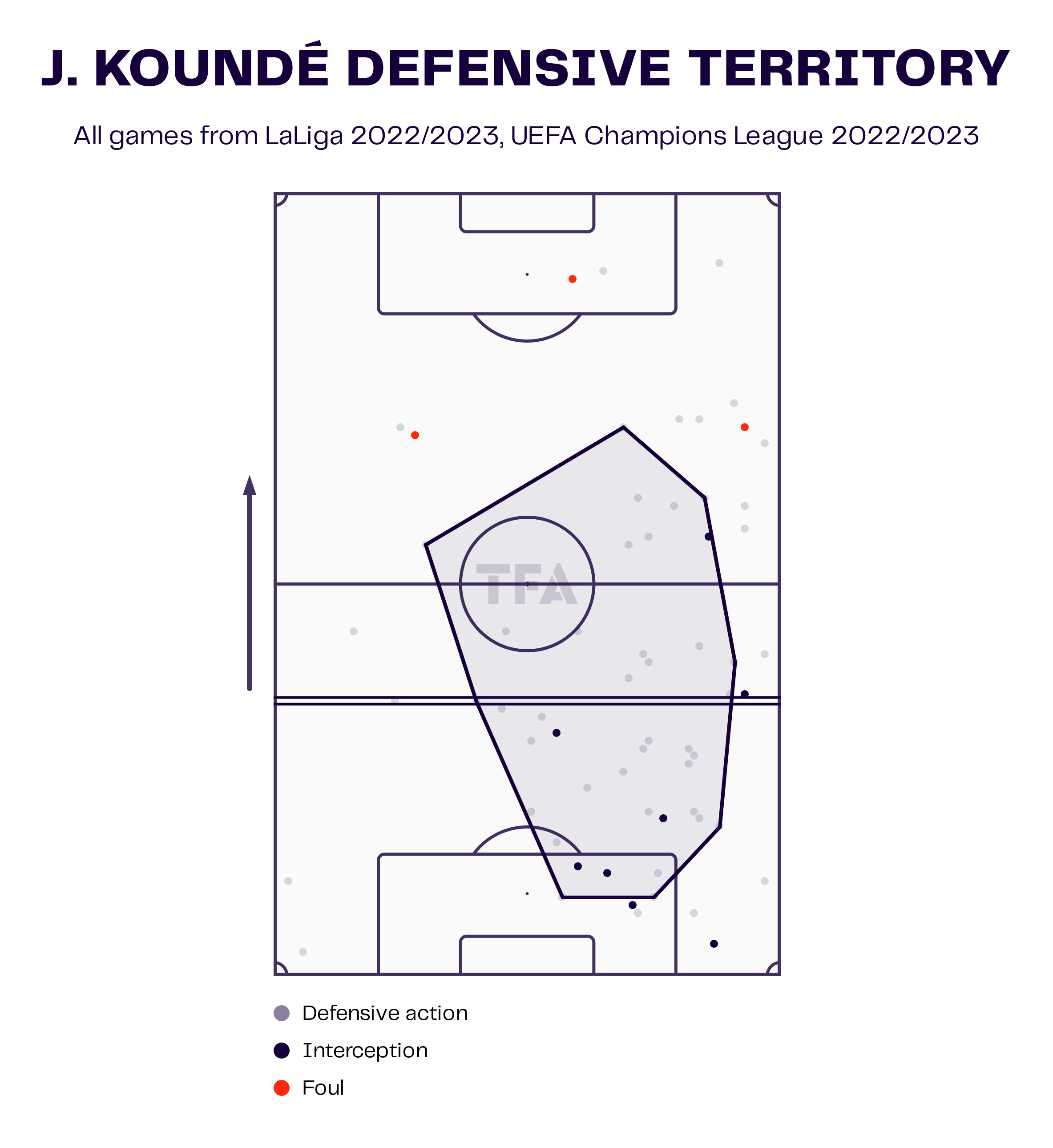 Jules Kounde’s defending has been a key part of his game. He wins most of his duels and is a strong defender on the ball. The above viz shows the defensive territory of the player. We can observe that Kounde hasn’t committed a foul inside his team’s half. He has committed all the fouls high up on the pitch. Defensively, Kounde averages 5.6 defensive duels, 3.26 aerial duels, and 1.87 loose ball duels per 90 minutes. He won 70.8% of his defensive duels, 64.3% of his aerial duels, and 25% of his loose ball duels. This shows his defensive abilities and his desire to win the ball for his team. Other than this, the player has made 3.7 interceptions and 9.56 recoveries per 90 minutes. He has been a great asset in the defence for Barcelona. 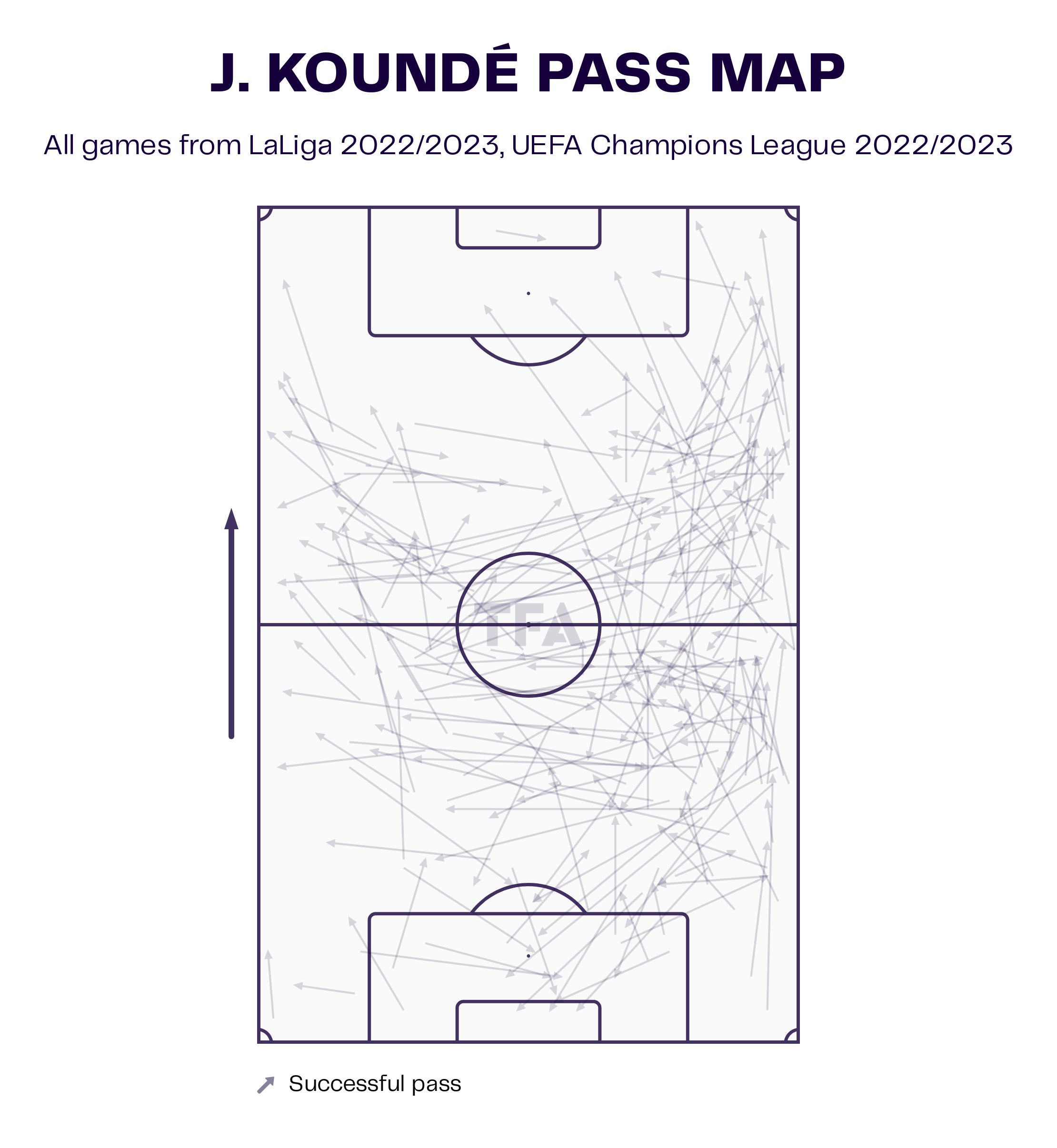 One of the areas where the defender has made the greatest contributions is in his passing. Jules Kounde has played like a regular full-back and has three assists in just four games. He provided two assists against his former team and one in the UEFA Champions League. Jules Kounde averages 59.69 passes per 90 minutes with an 89.8% accuracy rate. These include seven passes to the final third and 2.33 passes to the penalty box. Jules Kounde hasn’t stretched the opposition’s defence and has played a more defensive line.

Jules Kounde has been one of the best buys for Barcelona this season. He can play on any side in the defence and has the creativity that helped his side score three goals. The defender has also won most of his duels, and that is a great positive. Xavi will look to get the best out of his French defender and hope he plays with the same consistency.

‘Achieved a great year’- Barcelona could soon think about move for...

It’s Never Too Late For An Equaliser: Barça B fight until...