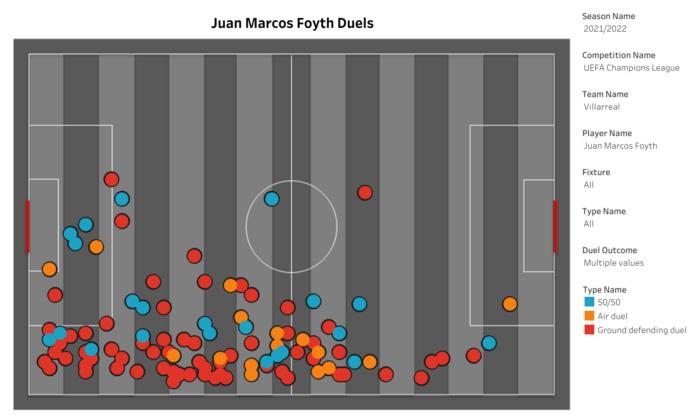 Barcelona’s manager looks to rebuild the squad in the summer and is making a move for some of the players to strengthen different positions in the team for his side. Currently, he is short of right-back options following the contract expiry of veteran, Dani Alves. One of the players that the former World Cup Winner has identified from their rivals to lead their defence from the right is Villareal’s Juan Foyth. The 24-year-old started his career as a centre-back. He made a permanent move from Spurs to Villareal last season. Initially, Foyth joined the Yellow Submarines on a loan spell back in 2020. Last season, he was part of the Villareal side that reached the semi-final stages of the UEFA Champions League. The Argentine made ten appearances in the competition, and his form last season is one of the main reasons why Barcelona are interested in signing him.

Foyth made 37 appearances for the Yellow Submarines in all competitions last season, scoring a goal and also providing an assist. As mentioned earlier, ten of his appearances came in the UEFA Champions League. 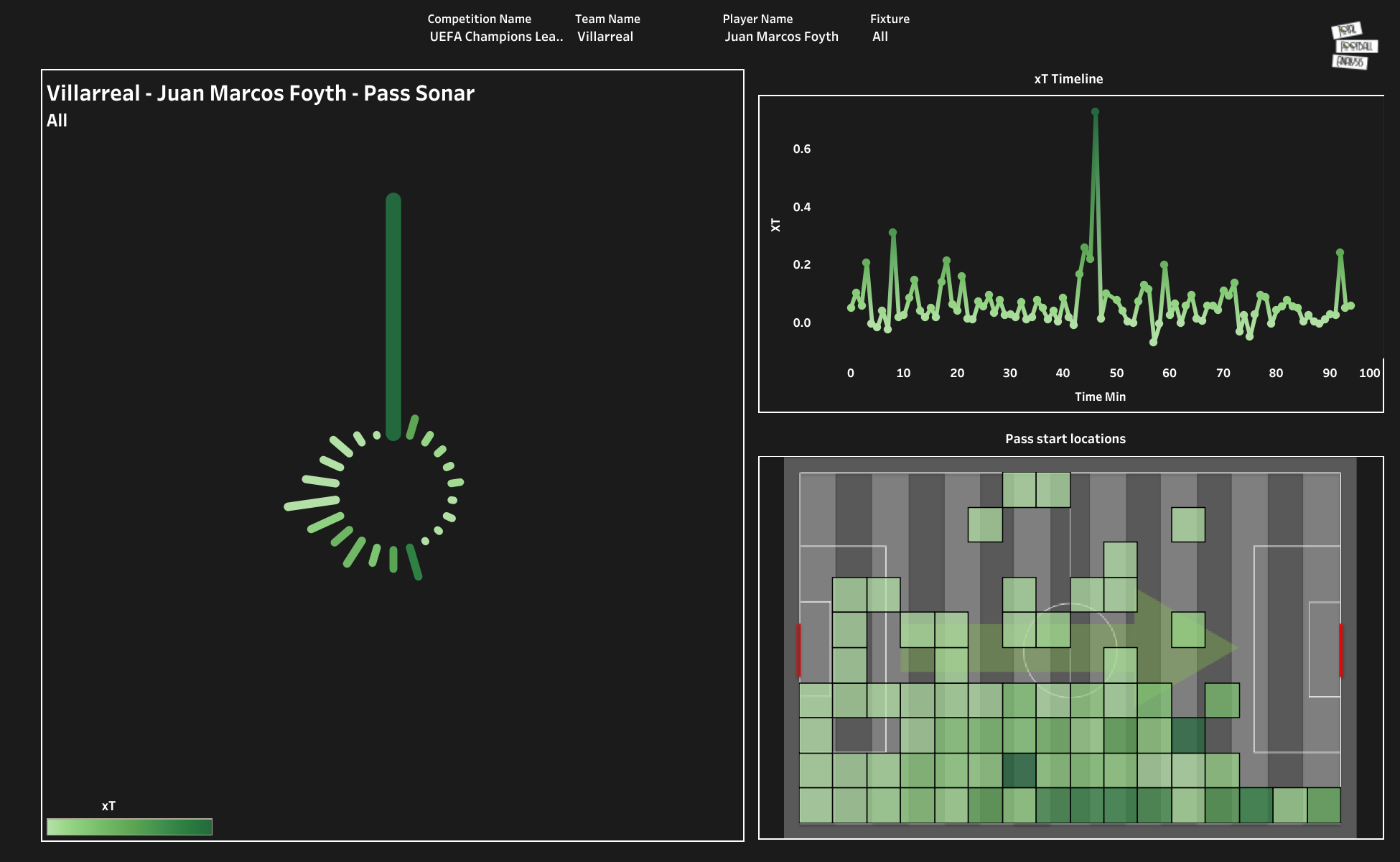 The above viz shows the pass start location and the threat created from passes at different time intervals. We can observe that the player was given a more defensive role, and he made very few forward runs. The pass start location map shows that Foyth attempted fewer passes from inside the attacking third. He averaged 33.17 passes per 90 minutes with an accuracy rate of 81.09%. Of these 33 passes, around 4.37 passes were attempted into the attacking third per 90 minutes. Foyth held his defensive line, and this was the reason why he was unable to provide an assist or score a goal. Since the player has played in the centre-back position before, Xavi could also use him in a similar role. Foyth can act as a third centre-back in some of the games and allow the other players to attack the opposition goal. 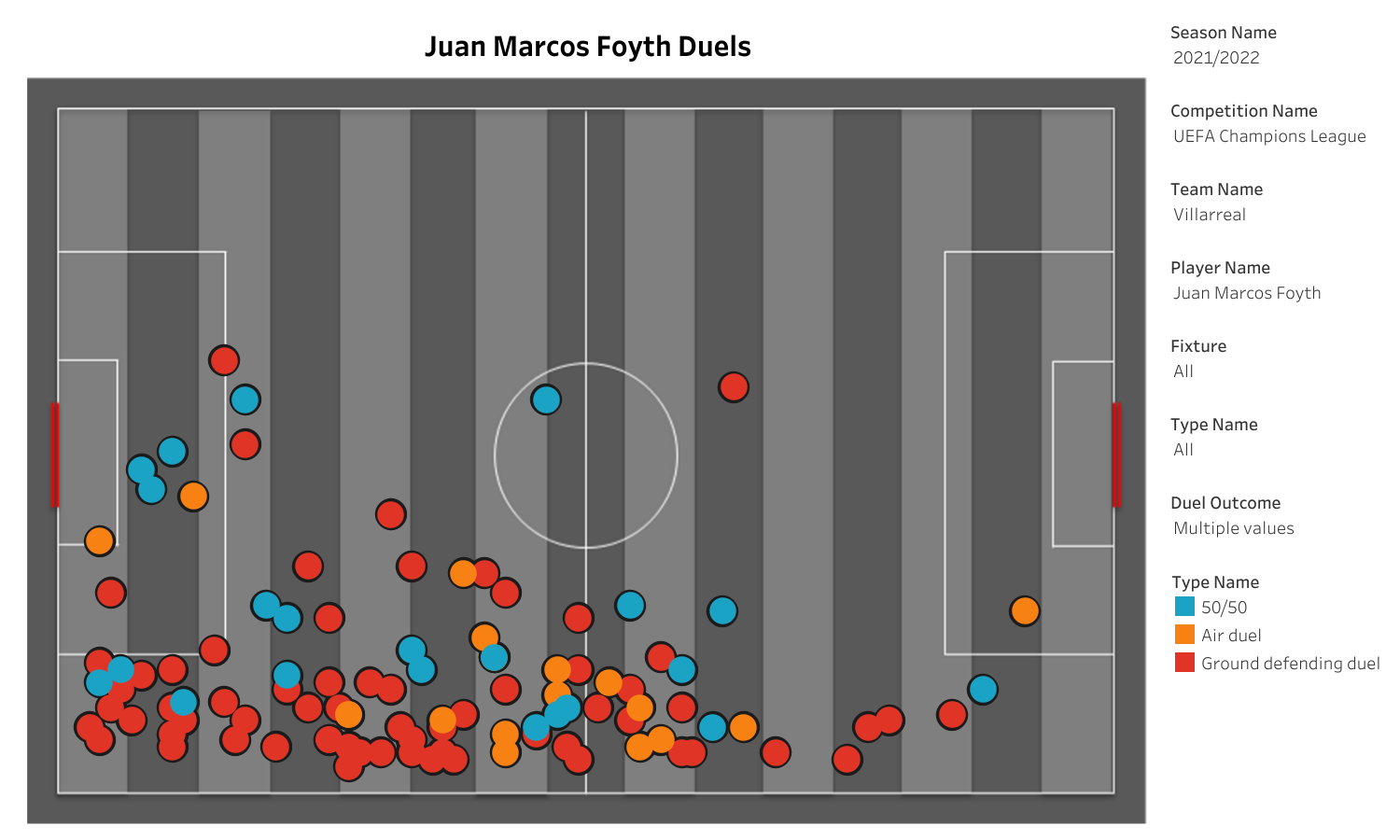 The Argentine was involved in 18.44 defensive actions per 90 minutes with a success rate of 76.29%. Foyth contested 13.3 defensive duels, 2.38 aerial duels, and 3.42 loose ball duels per 90 minutes. The above viz shows all the duels that were won by the player or ended in a neutral result. He won 23.57% of defensive duels, 60% of aerial duels, and 55.56% of loose ball duels. He has won most of the duels towards the right side and contested fewer dribbles towards the centre of the field.

Villareal played a defensive style of football, and Foyth was one of the top performers in the team for Unai Emery. Juan Foyth had impressive defensive stats and could turn out to be the perfect signing for Barcelona. He is versatile and could solve Barcelona’s centre-back problems. Barcelona are looking for a right-back and might sign the Argentine in the summer.

Is Ousmane Dembele’s time over at FC Barcelona?