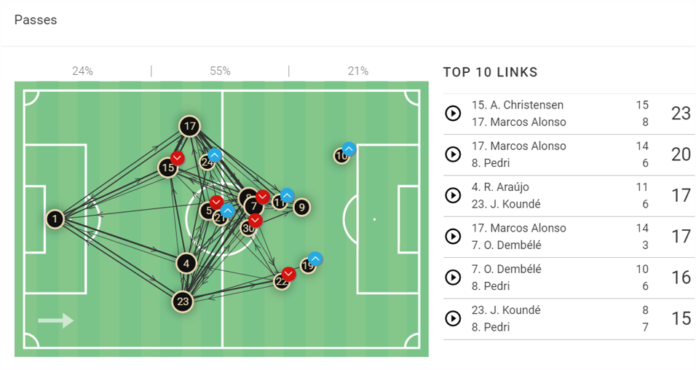 Spanish giants Barcelona will host German champions Bayern Munich in a must-win match in the UEFA Champions League. Barcelona sits in the third position in Group C after disappointing results against Inter Milan in both home and away legs. They must win three points against Bayern Munich in order to remain in the competition. Bayern Munich, on the other hand, have qualified for the next round and will hope to keep a 100% win record going into the knockout phase.

Bayern Munich sits comfortably at the top and have scored 13 goals. Their defence has only conceded two goals. The average xG and xGA rate for the team is 2.17 and 1.48, respectively. The last meeting between the two teams ended in favour of the German club. They won the match by a scoreline of 2-0.

What happened in the last match?

Bayern Munich secured a comfortable 2-0 win over Barcelona in their previous meeting. Barcelona were the more attacking team in this match but failed to convert their chances. 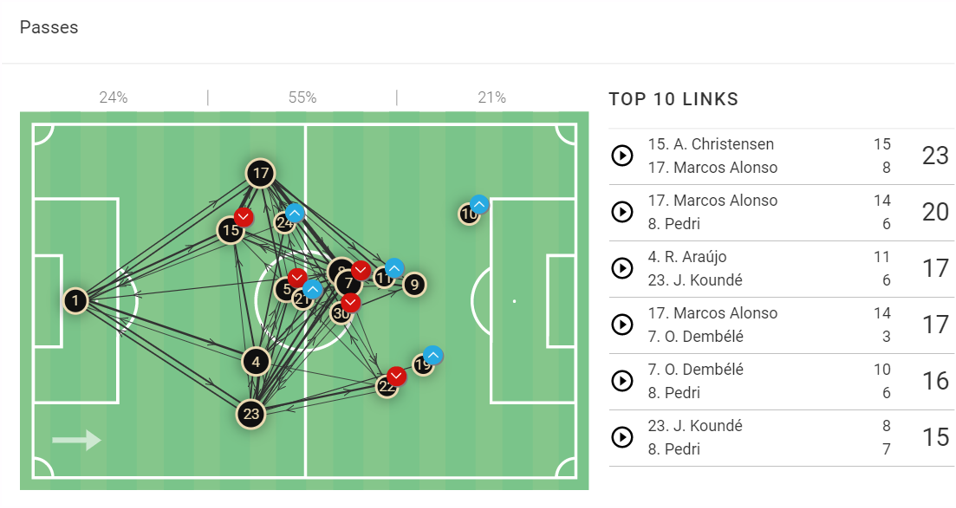 Xavi’s men played in a 4-1-4-1 formation, and they created most of the chances from the left side. The above viz shows the average position of the players and the pass links. We can observe that Dembele drifted more towards the centre and Raphinha stayed wide on the right side. 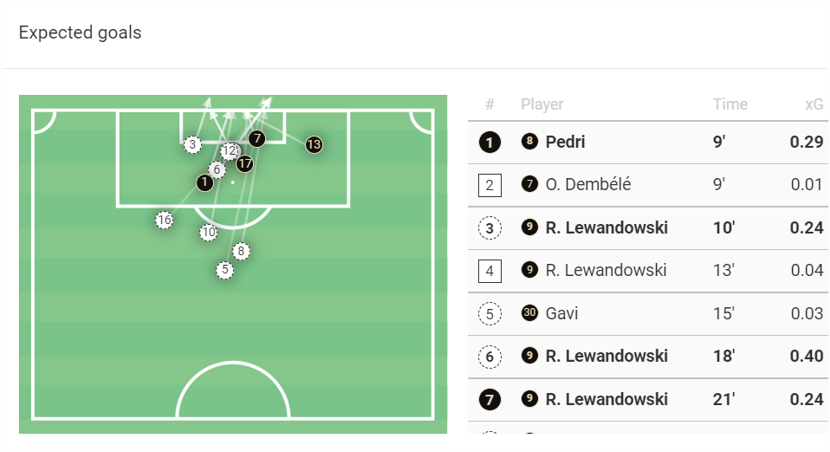 Barcelona created 27 positional attacks and four counterattacks in that game. Their average rate this season is 41 positional attacks and two counterattacks. Barcelona performed below their average level. However, they attempted 17 shots, which is the average number of shots that they have attempted this season. Converting chances against Bayern was the main problem, and they will look to convert more chances in this match. 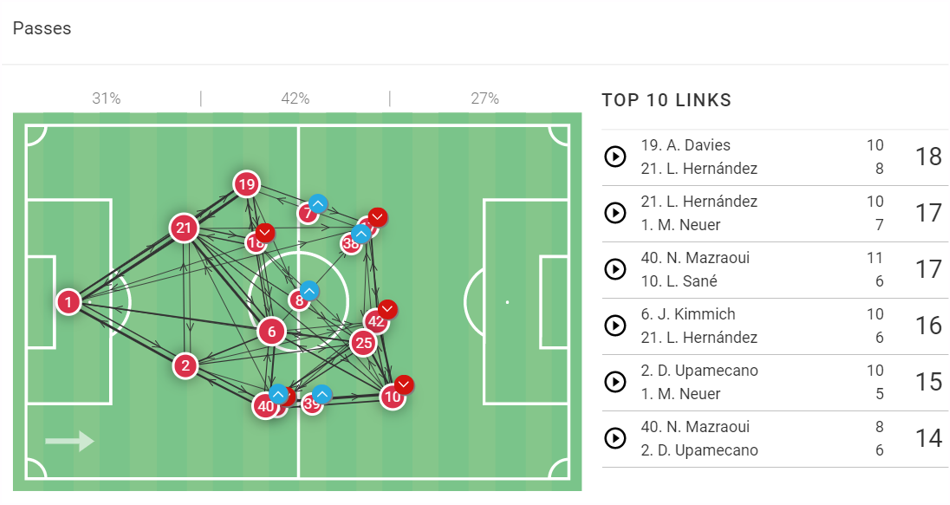 Bayern Munich plays in a 4-2-3-1 formation and creates most of their pass links on the right side. Joshua Kimmich likes to keep the ball and is their main distributor. His side created 28 positional attacks and two counterattacks against Barcelona. Overall, the team attempted 12 shots. The team averages 35.5 positional attacks and 3.25 counterattacks. Their shot average is also 17.5 shots per match. Bayern Munich will look to target Barcelona’s weaknesses in defence and make it two wins out of two. 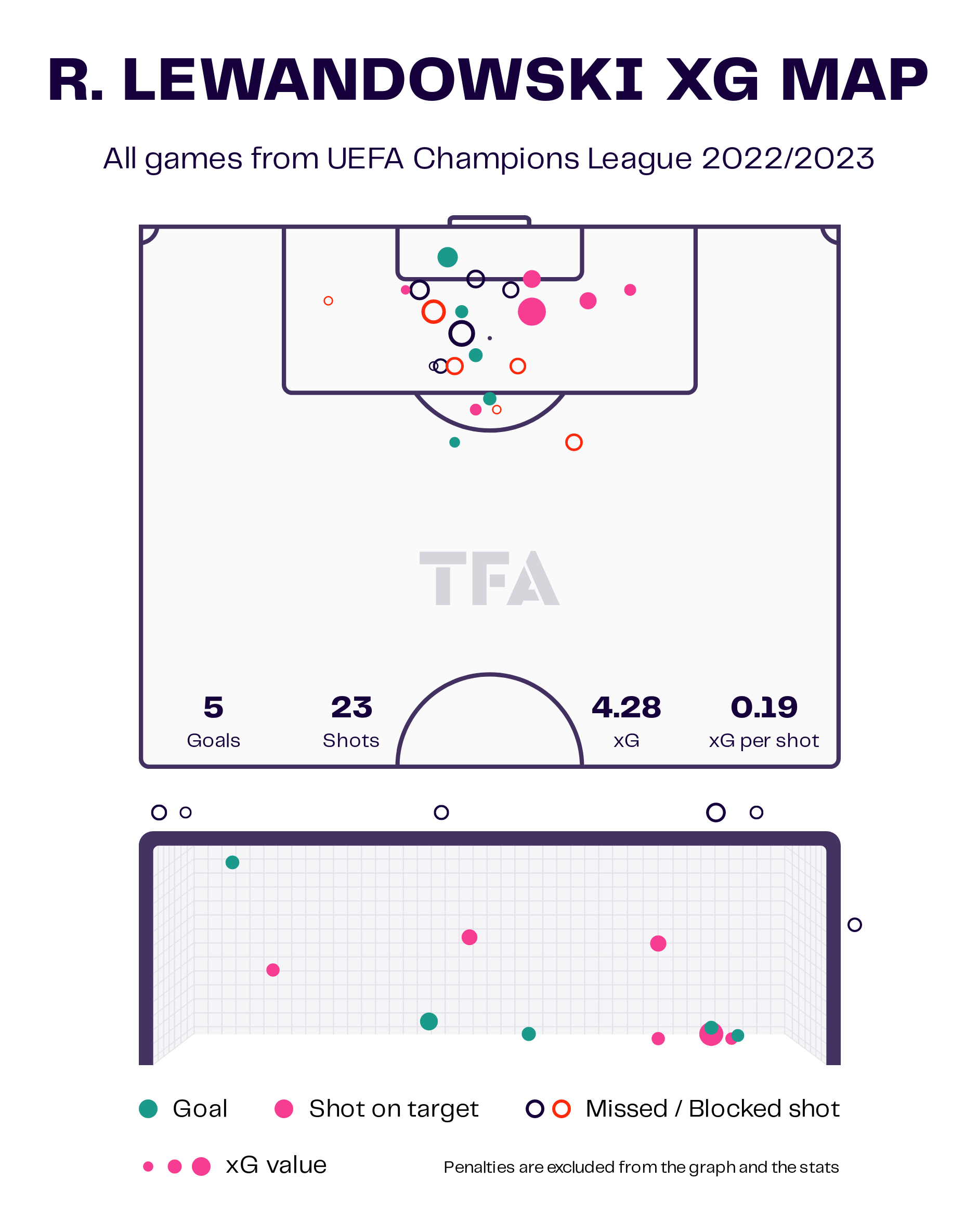 Former Bayern Munich player Robert Lewandowski will play a key role. The Polish international has already scored five goals in the competition and will look to add more against his former side. The striker can win aerial duels and is a threat inside the opposition’s penalty box. Barcelona needs goals from him to get three points from the match.

Joshua Kimmich will captain his side in this match. The defensive midfielder has been a key member of the squad and is one of their best players. He is also active on set-piece duties and would like to chip in with an assist or two. Kimmich already has two assists in three appearances. One of the assists came against Barcelona in the previous round. He will aim to maintain his side’s 100% win run.

Sergi Roberto is a new injury concern for the manager. Hector Bellerin might take his position on the right side of the defence. Gavi will also return to the squad after missing the recent match.

Bayern Munich will be without Manuel Neuer, Lucas Hernandez, Leroy Sane, and Bouna Sarr for this match.

Miralem Pjanic signing shows how wrong Barcelona have been

Off-field issues no distraction for Barcelona

How Barcelona barely salvaged a win over Real Valladolid in La...