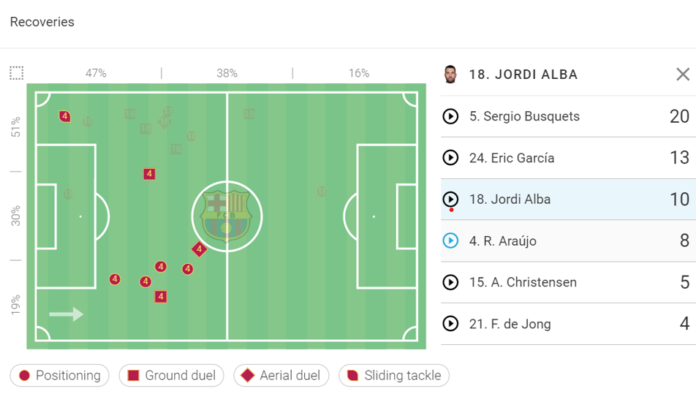 Barcelona have been the most active team in the transfer business since the arrival of Xavi as the manager of the team. The Barcelona legend aims to build a strong team, and that has resulted in a lot of movement among the players. They signed some of the top players in the summer, but one of the areas where they failed to make any signings was in the full-back spot. Xavi was unhappy with the options he had with him in the right-back and left-back positions. He wanted to bring in some new faces, but Barcelona haven’t made a signing in that position yet. Barcelona drew their opening fixture of the season by playing a goalless draw against Rayo Vallecano. The full-backs were unable to make a lot of impact, and this will be a big worry for the manager going into the future.

Barcelona have Jordi Alba and Alex Balde as options in the left-back position. Sergi Roberto and Sergiño Dest are the two right-backs, with Ronald Araújo being the other player who can play a similar role. Alba and Araújo started in the last match against Vallecano. Dest is not in the plans of the Barcelona manager, and he is expected to get the least amount of game-time. Now, let us look at some of the stats from the last game that will show why Barcelona should invest in full-backs. 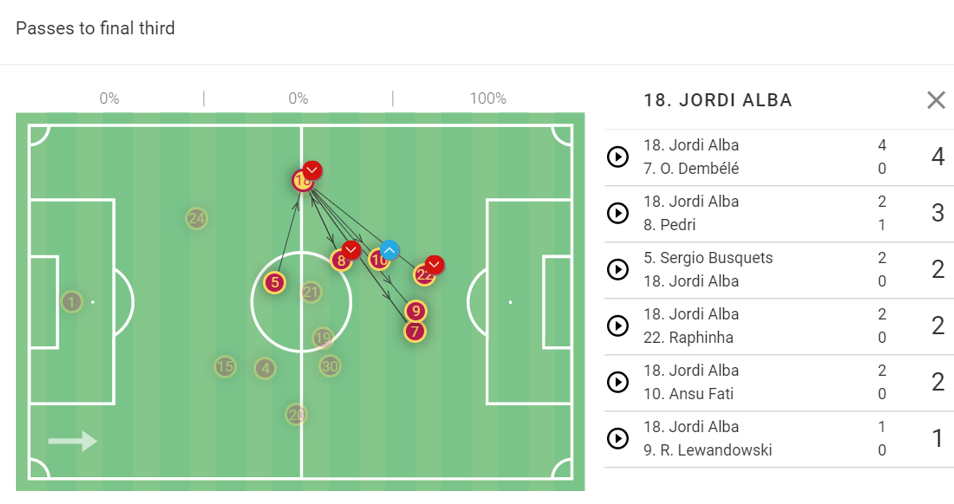 Barcelona were unable to break the opposition’s defence in their last game. Alba started as the left-back and played a more attacking line than Araújo. The left-back attempted 54 passes with an accuracy rate of 83%. These included two crosses but he failed to find a teammate. The above viz shows the links of the 12 passes attempted by Alba to the final third. He managed to deliver 11 passes and allowed his teammates to run towards the opposition defence. However, Alba’s passing didn’t cause much trouble for the opposition. 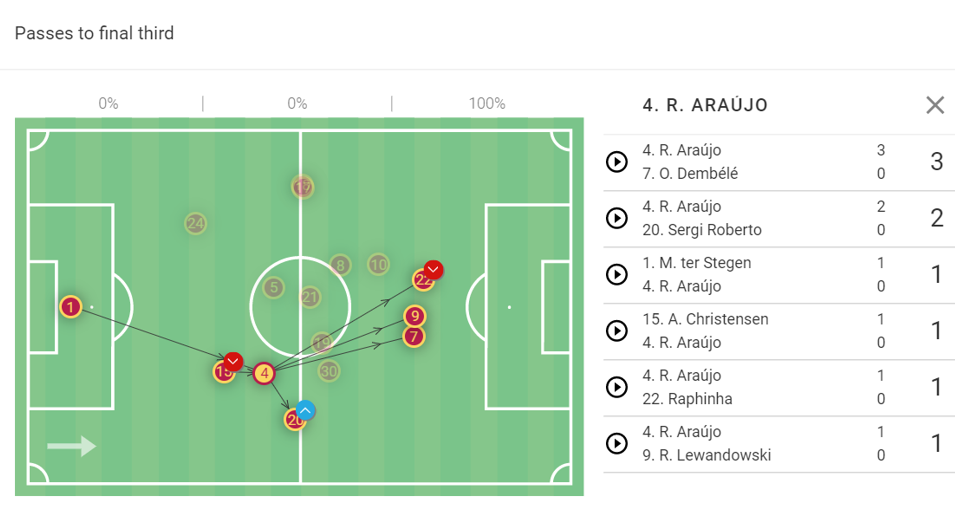 Araújo is a defensive full-back. He is naturally a centre-back and lacks that attacking instinct. He attempted 46 passes with a 93% success rate. The above viz shows that Araújo’s average position was inside his team’s half. He acted more as a defensive cover for the right-winger. Araújo attempted a cross and was able to find a teammate. 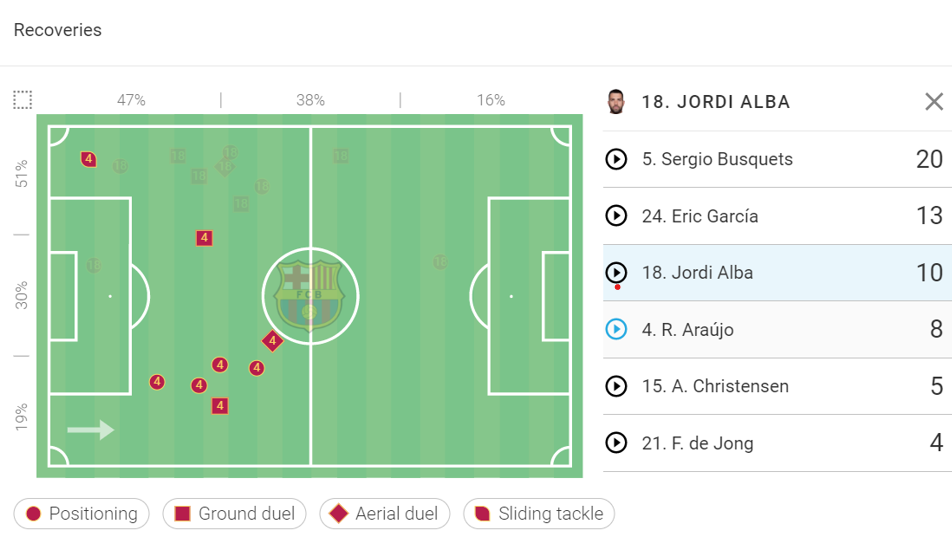 Araújo made eight recoveries, and one of the drawbacks was that all these recoveries were made inside his team’s half. He was unable to make a recovery inside the opposition’s half. The manager expects his full-back to stay on the run and recover the ball in crucial areas inside the opposition’s half. This allows the team to keep the attacking momentum. 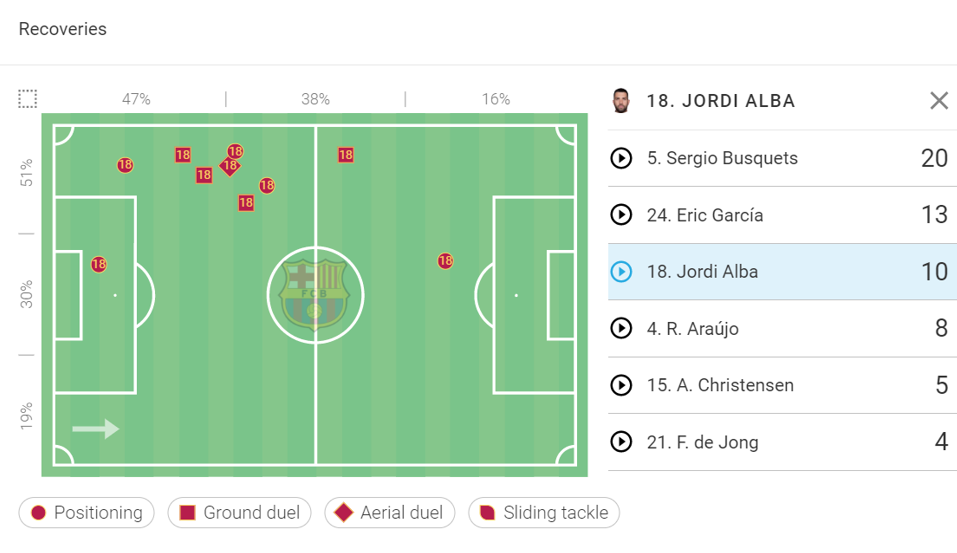 Alba himself made ten recoveries, with two coming inside the opposition’s half. He also failed to make recoveries on the wider sides inside the attacking third or at the top of the middle third.

Barcelona’s second-choice full-backs, especially Alex Balde and Dest, are less experienced, and they need more game-time. Alba has also lost a bit of pace, and that has affected his attacking ability. Araújo is a better centre-back than a right-back. Chelsea’s Marcos Alonso could be signed as a left-back, but they also need a right-back who can run up and down the pitch. Xavi will look to secure moves for these players, but he can only do so if some of the other players leave. Barcelona may sign a full-back before the deadline day or they might wait for midseason.