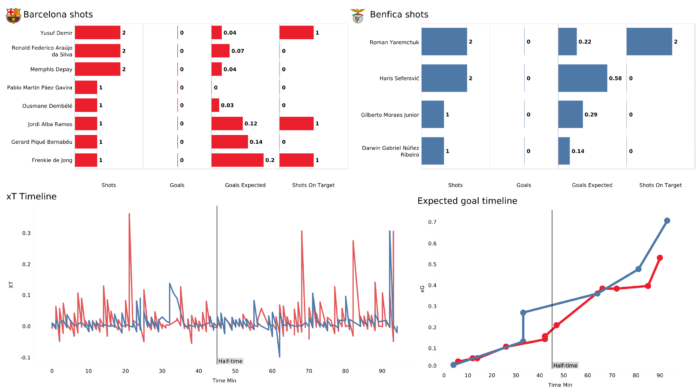 FC Barcelona qualified for the last-16 stage of the UEFA Europa League after beating Napoli in a two-legged playoff. Xavi’s men played a 1-1 draw at Camp Nou and defeated their opponents by 4-2 in the second leg away at the Diego Armando Maradona Stadium. They have shown a significant improvement in their attack since the former Barcelona player took over from Ronald Koeman in the managerial position.

Barcelona is fourth in LaLiga with 12 victories in 25 games. They have scored 46 goals and conceded 28. Of these 46 goals, 27 have been scored under Xavi in 13 league games. Earlier, the team averaged less than two goals per match, and now the average is nearly two goals per match. 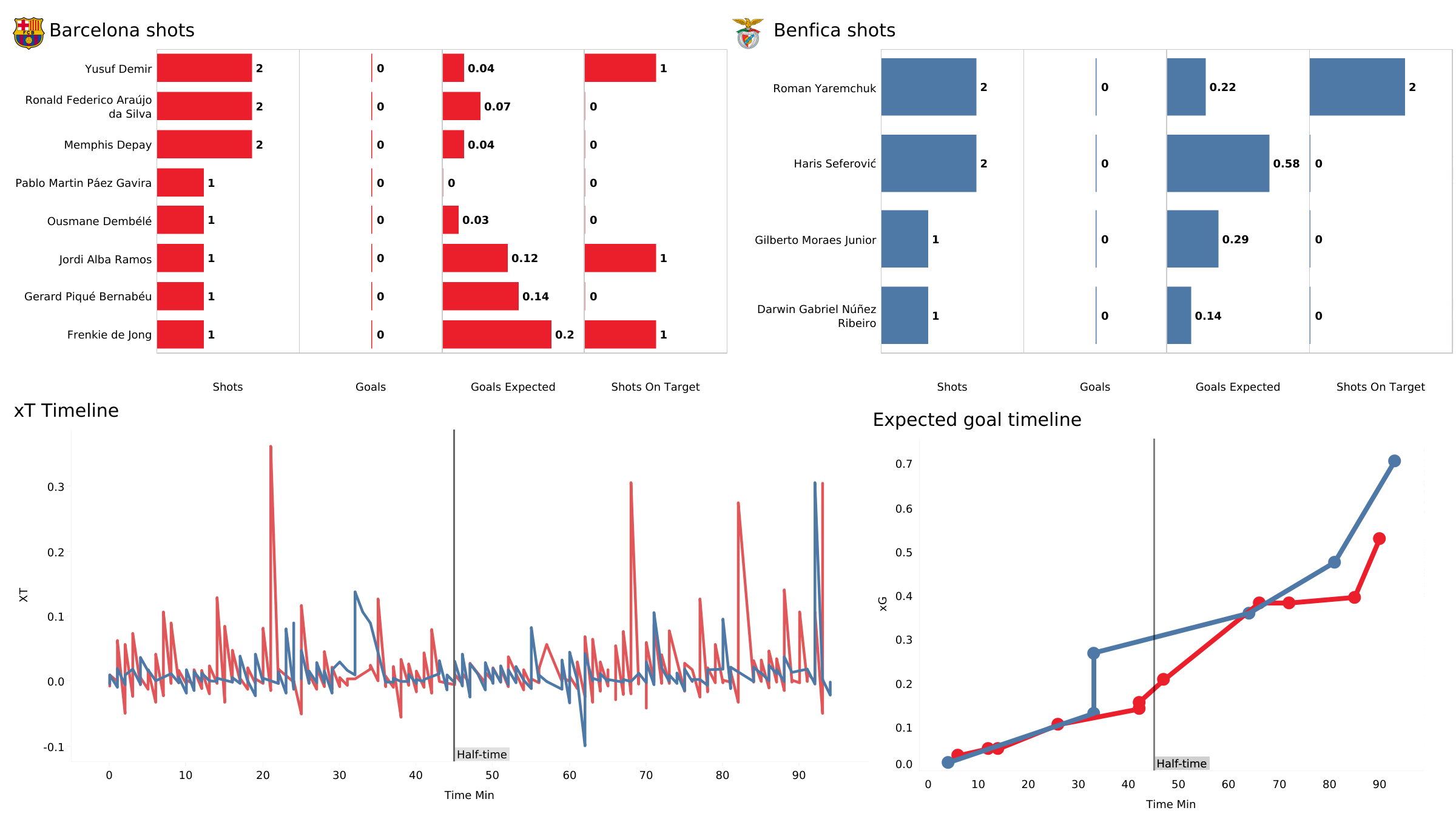 Xavi’s first match as a Barcelona coach in the UEFA Champions League was against Benfica. Barcelona played out a goalless draw, but there were some positives from the last time these two teams met. The Spanish club attempted 11 shots, and three of them were on target. The xT timeline shows that Barcelona created more threats towards the end of the second half. They attempted four shots during that period. 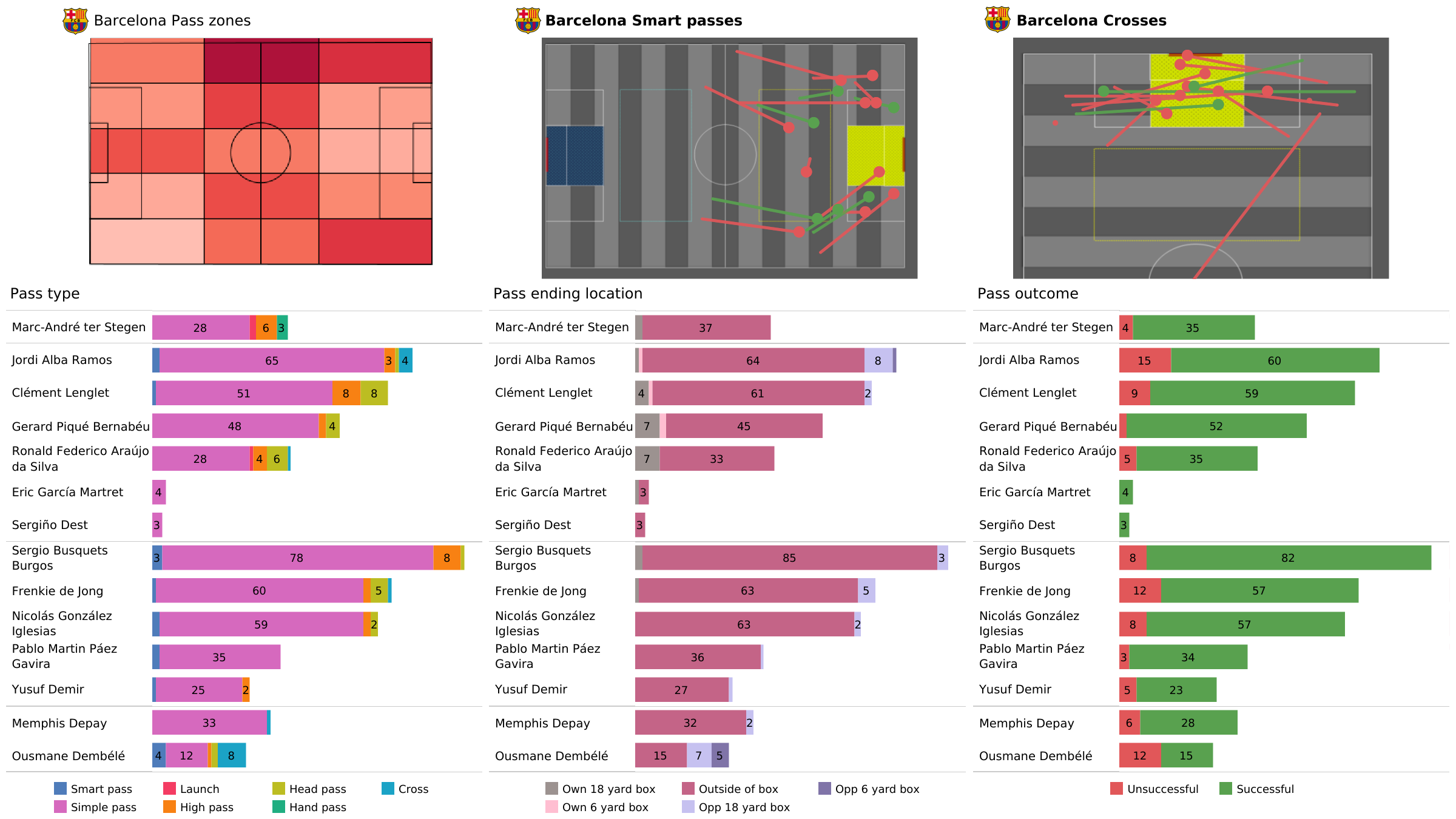 The above viz shows the pass type, pass ending location, and pass outcome of Barcelona players in the same match against Benfica. We can observe that Barcelona have attempted a lot of crosses as well as smart passes. Ousmane Dembele attempted 27 passes. Of his 27 passes, 12 were simple passes, four smart passes, eight crosses, two-headed passes, and one long pass. Other Barcelona players were also direct and attempted a lot of long balls in the match.

Barcelona added a few players in the winter transfer window this season. They were short of attacking options and made some crucial signings to improve their attack. They signed Pierre Emrick-Aubameyang, along with Ferran Torres, Adama Traore, and former Barcelona player Dani Alves. The team is much stronger than they were in the UEFA Champions League. Xavi is using a more direct approach to score goals, and he is getting the results. Barcelona will look to earn silverware under the new manager this season in the form of the UEFA Europa League.

The curious case of Ernesto Valverde and the Blaugrana blues

Under the microscope: Can Gavi become a future leader at Barcelona...