Barcelona go into the new season with the hope of winning silverware after a disappointing last season. Xavi will be in charge for the first full season as a Barcelona manager. He has spent a lot of money recruiting players who could help in the development of the team. The former Barcelona player is still looking to add reinforcements, but the current situation might not allow him to add more players in this transfer window. Barcelona will be one of the favourites to win the LaLiga title, and the squad also has the strength to contest for the UEFA Champions League title.

New additions to the team mean that the manager has a lot of options to look for while selecting the playing XI. Let us look at some of the recent formations used by Xavi that show how Barcelona could line up next season. 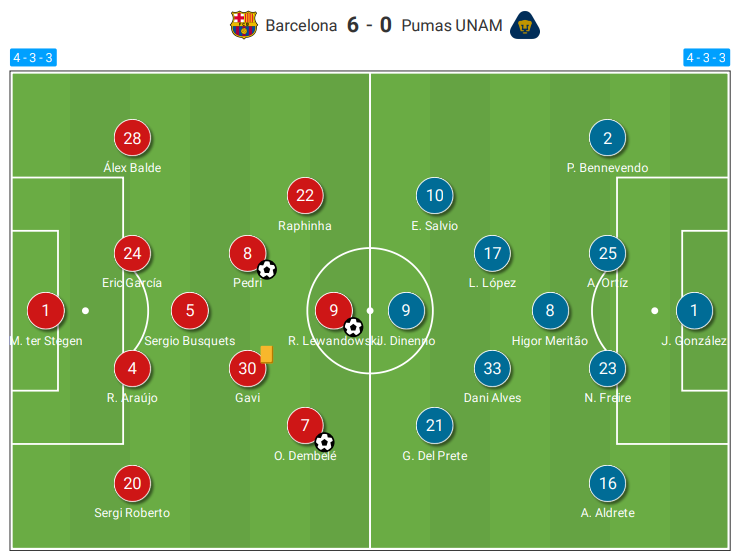 Barcelona’s most recent friendly was against the Mexican club, Club Universidad Nacional, A.C. Xavi opts to go with the traditional 4-3-3 formation used by Barcelona since his playing days. The team plays with a defensive midfielder whose role is to guard the centre-backs. He is also the link between the attack and the defence. The other two midfielders just play in front of him in a box-to-box role. In the attack, the centre-forward is supported by two wingers. Let us look at the players who are likely to remain regulars under Xavi. 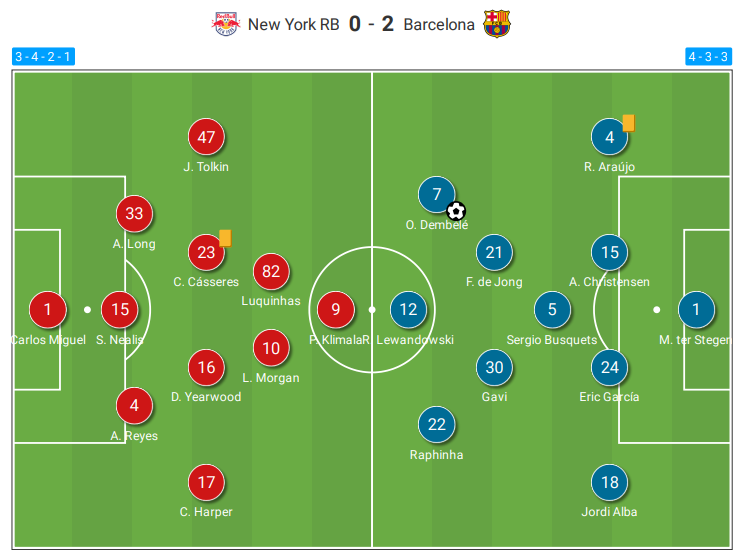 Marc-André ter Stegen will stand between the sticks, with Inaki Pena being the second-choice goalkeeper. Choosing the back four will be a bit of a headache for the World Cup winner. Jordi Alba will be the first choice at left-back, with Alex Balde as the backup defender. They still have right-back issues as the manager is not sure about who will start in that position. After failing to sign Cesar Azpilicueta from Chelsea, Xavi is left with Sergi Roberto, Sergino Dest, and Ronald Araujo as the three players to choose from as regular right-back in the team. Sergi Roberto was preferred in this position in each friendly, and he is likely to remain the first choice ahead of the other two. Araújo is a centre-back and is unlikely to feature regularly in that position. He will be a backup option.

Choosing a perfect pair of centre-backs is the biggest issue in defence for the manager. Barcelona signed Andreas Christensen and Jules Kounde in the summer. Xavi also has the options of Gerard Piqué, Eric García, and Araújo. García has started in every friendly and might be preferred more over the other four centre-backs. The two new signings also possess the capability to become the first choice at the club. The likely back four could be Jordi Alba as left-back and Roberto or Araújo in the right-back position. García, Kounde, and Christensen will be the preferred choices for centre-backs.

Xavi prefers to stick with his 4-3-3 tactics throughout the game. This means that the midfield will regularly feature three players. The midfield has plenty of options in the form of veteran Sergio Busquests, new signing Franck Kessie, Frenkie de Jong, Pedri, Gavi, Miralem Pjanić, Nico González and Pablo Torre. Busquests will feature at the heart of the midfield. His experience will play a great role in carrying the team forward. Pedri, Gavi, De Jong, and Kessie will be contesting for the other two positions. De Jong and Kessie can also fill the role of a defensive midfielder alongside the experienced Bosnian, Pjanić.

The attack will be led by Robert Lewandowski. He will be the greatest threat from Barcelona. Pierre-Emrick Aubameyang will be the second-choice striker for Xavi. With new signings, Ousmane Dembele appears to be the favourite to start on the right wing. Raphinha is also capable of playing in the same position. Xavi used Raphinha on the left side in the last friendly match, and he might go with the same tactics. The other wing options in the team are Ansu Fati, Memphis Depay, and Aubameyang.

Barcelona have a lot of talented players in their squad this season. The team has more than one option for every position. However, Xavi still has issues in the right-back position and will look to add one or two more players. He also wants to offload a few players before the end of the transfer window. His team will be facing Rayo Vallecano in their first match of the season, and Xavi will look to go with the strongest starting XI.

Under the Microscope: Memphis Depay’s performances for FC Barcelona this season