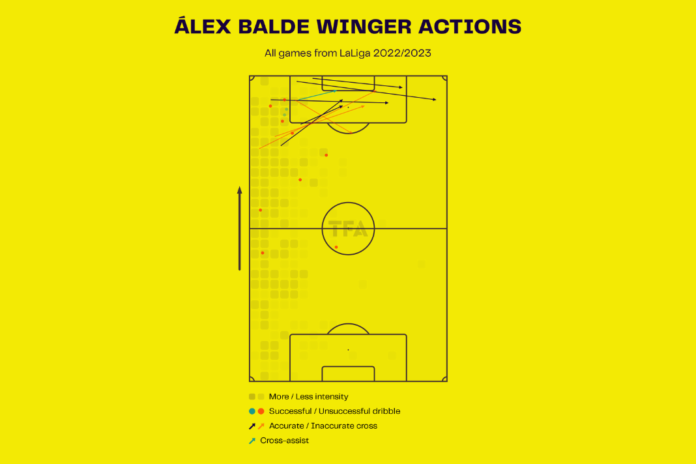 Barcelona were huge money spenders in the summer transfer window. Xavi had already informed the board that he needed to make some changes to the team and bring in a few players for different positions on the pitch. They bought in the likes of Robert Lewandowski, Jules Kounde, Raphinha, Andreas Christensen, Marcos Alonso, Hector Bellerin and Franck Kessie. Xavi was a bit worried about the left-back position. Jordi Alba’s form has seen a sudden dip, and the player is unable to perform at the top level. Marcos Alonso was signed on the deadline day to give another option to the manager. Xavi has given a lot of chances to the youngsters, and one of the players who has benefited from Alba’s poor form is 18-year-old Alex Balde. He has been the number one choice left-back in LaLiga and is likely to get the nod ahead of his senior pros. Now let us look at some of the stats that show why Alex Balde is becoming a preferred choice in the left-back position for Xavi. 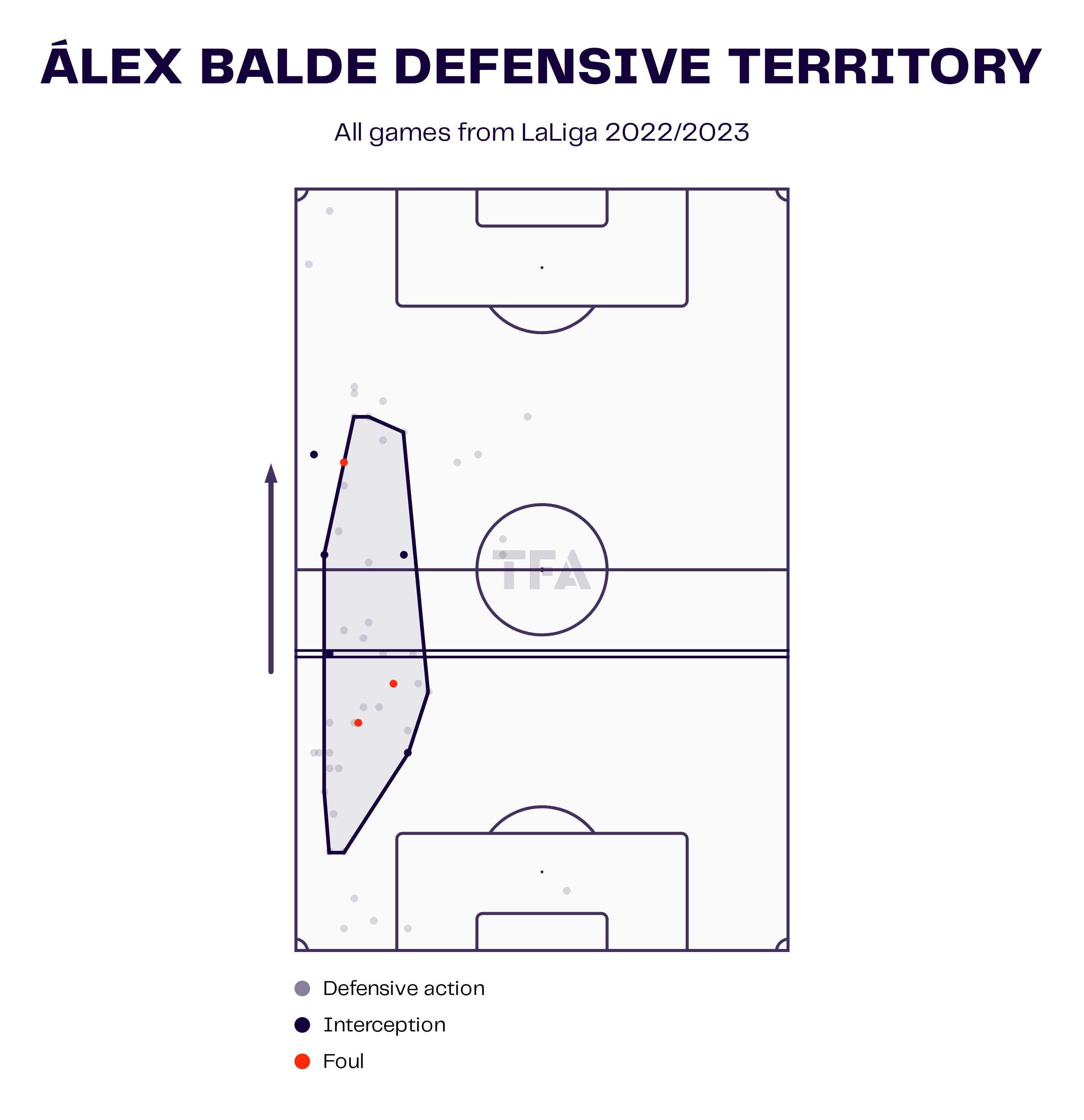 Alex Balde has started in five of the six matches played in the LaLiga and has spent 409 minutes on the pitch. The youngster provided two assists in the last match played against Elche, and these were the first goalscoring contributions from his side this season. The above viz shows the defensive territory of the player along with the interceptions made and the souls committed. The full-back averages 14.7 duels per 90 minutes and has won 46.3% of them. The 18-year-old has won 63.6% of his defensive duels, 50% of his aerial duels, and 46.2% of his loose ball duels. Adding to this, Balde averages 3.08 interceptions per 90 minutes. The stats have been decent, and Barcelona have kept four clean sheets in five appearances for Alex Balde. 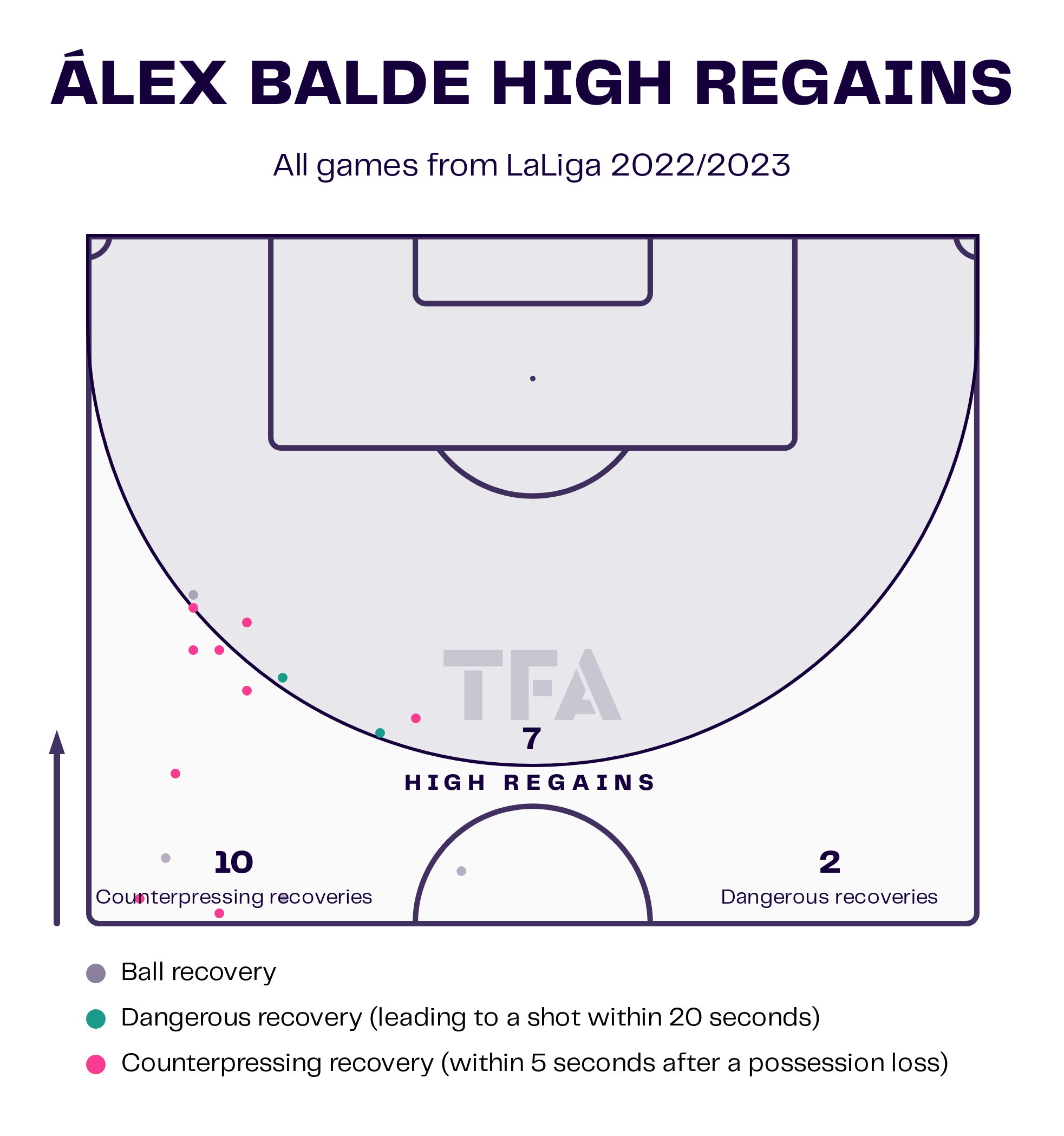 One of the areas where the defender has impressed is with his ability to recover the balls. Alex Balde averages 7.04 recoveries per 90 minutes and 50% of these recoveries have been made in the attacking half. These include ten counter-pressing recoveries and two dangerous recoveries. Alex Balde has made seven recoveries in the final third. He has commanded the left side so far for Barcelona. 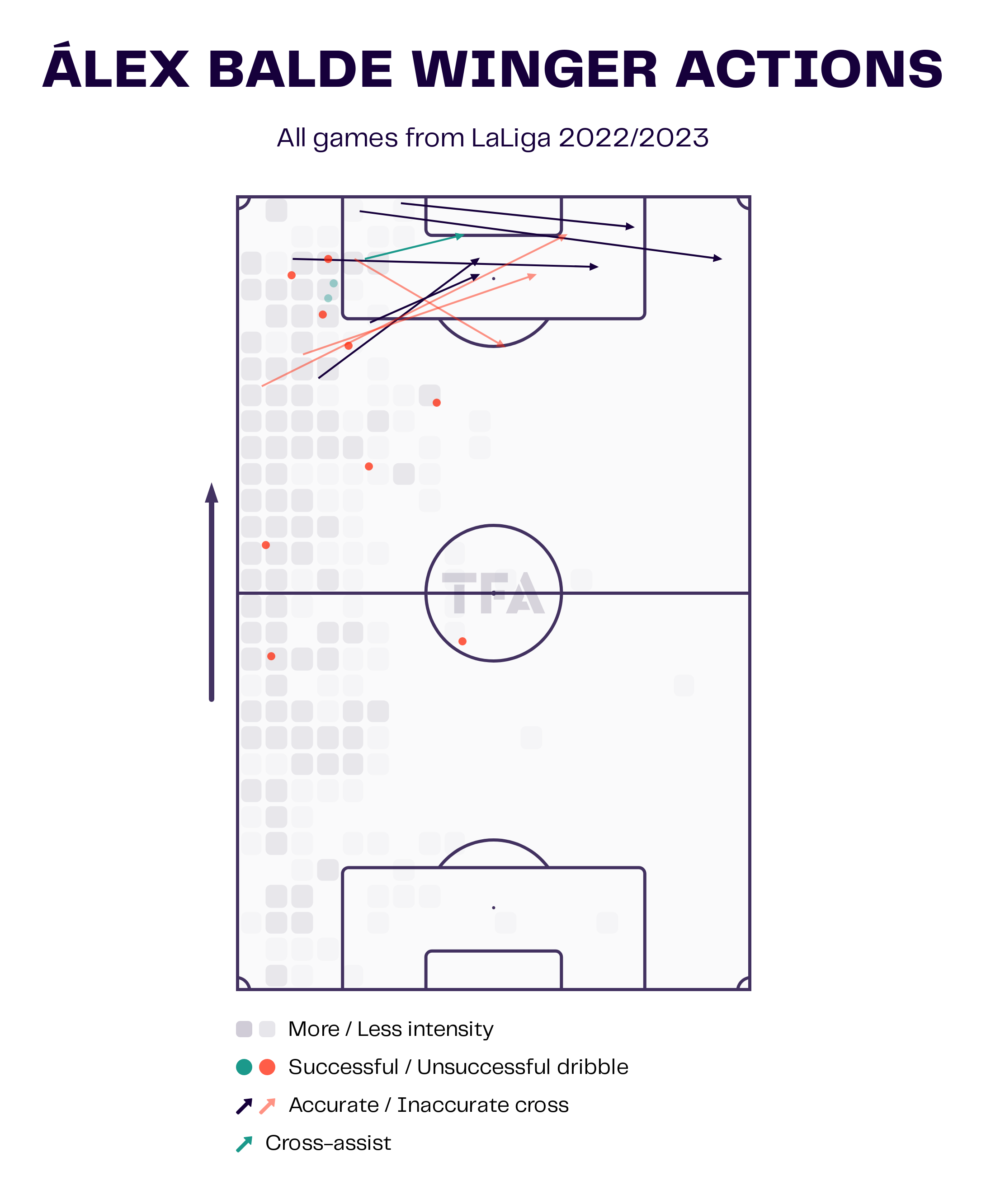 The youngster averages 43.57 passes per 90 minutes with a 91.4% accuracy rate. These include 0.88 passes to the final third and 1.32 passes to the penalty box. Alex Balde has been a bit accurate with his crossing. He has attempted nine crosses and six have found a teammate inside the opposition penalty box. The above viz shows the dribbles, crosses, cross-assist and the attacking areas of the player. Alex Balde has struggled to dribble past the opponents, but his crosses have been delivered to dangerous areas, and one cross has even added to the assist tally of the youngster.

Alex Balde has settled well in Xavi’s squad and it looks like the player has solved a lot of issues for the Spanish club. He is the future of the club and will look to maintain his good form going into the season.

Barcelona cannot afford to not get it right this window